The Lunar New Year is upon us, beginning on January 31, 2014, and bringing us the Year of the Horse. South Coast Plaza has various Lunar New Year goings-on planned, such as an exhibit, Chinese music, and martial arts and stilt performers. The exhibit was set up on January 23 and continues until February 9, with the shows taking place on the weekends.

If you happen to take a trip to South Coast Plaza during this time, here are some of the special sights you will see. There are actually a good number of tributes to the Year of the Horse throughout the mall.

A Golden Horse in Jewel Court

An artfully crafted golden horse has found a home in Jewel Court outside of Macy’s.

The biggest display South Coast Plaza has set up is in Jewel Court in front of Macy’s. A large golden horse is a piece of art set within a very well-done Chinese-themed scene.

Above the golden horse display, shoppers may glimpse well wishes for a happy New Year.

In addition, the top levels of the mall feature signage wishing shoppers a happy New Year.

Year of the Horse

One of the funnest items celebrating the Year of the Horse comes in the form of special Godiva chocolates for the Lunar New Year. These are not exclusive to South Coast Plaza, but it’s hard to miss the huge ad that is featured at the South Coast Location in honor of the celebratory candy.

Various South Coast Plaza stores featured special Year of the Horse campaigns. Check out some of the most memorable ones.

Sak’s Fifth Avenue display at the front of the store 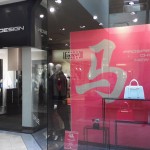 Red placards were placed in many store windows, such as the children’s store, Catmini

So if you’re at South Coast Plaza during the Lunar New Year celebration, make sure to keep an eye out for these fun displays. And don’t forget to get your Year of the Horse chocolate!

Check out another fun place to shop in the area: O.C. Marketplace.

What is SoCal Shopping Place?

A place to share great areas to shop, along with events and other fun stuff happening at shopping locales.